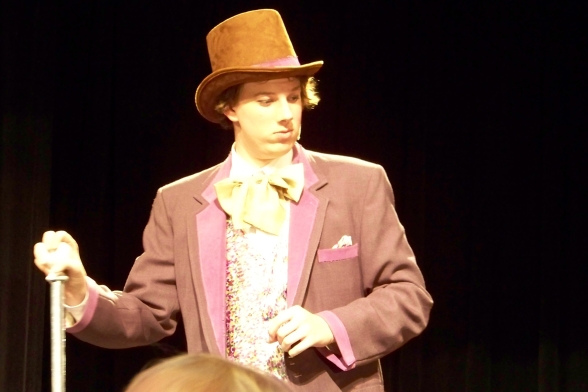 Yesterday I promised that I would post pictures of the actual play, not just the set but after I spent too much time putting them all on here, WordPress ate my post.  It threw out some things, it shifted other things, and made a mess of the whole thing.  I had to start over.

The play was so well put together, the actors did a great job and from the clips I’ve watched on YouTube I think we did a lot better!  Of course I say that I’m the mom.  C did exceptional as Wonka.  His expressions cracked us up and the pink candy boat song had people holding their breath and jumping when he did the final creepy laugh!  I am sad the musical is over.
I cried every time he came out and held my breath every time he sang.
I love watching my kids do things they love!

The Bucket Shack.
Charlie has a clear, strong voice it never wavered the entire 4 shows.
And the grandparents were FUNNY.

Mrs Bucket making cabbage soup.
Check out that stove!
All cardboard,  built on a push cart so it can be easily moved. 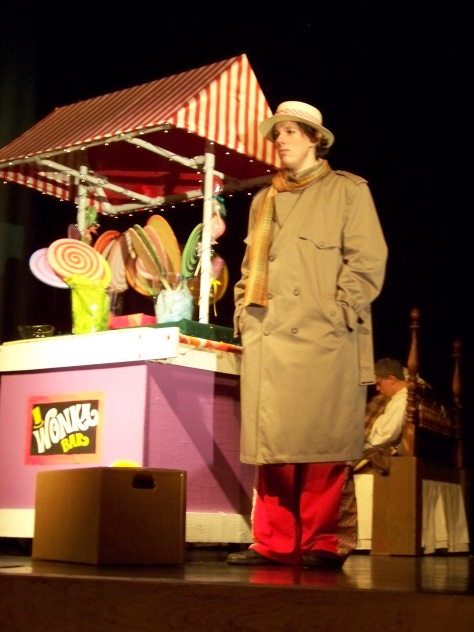 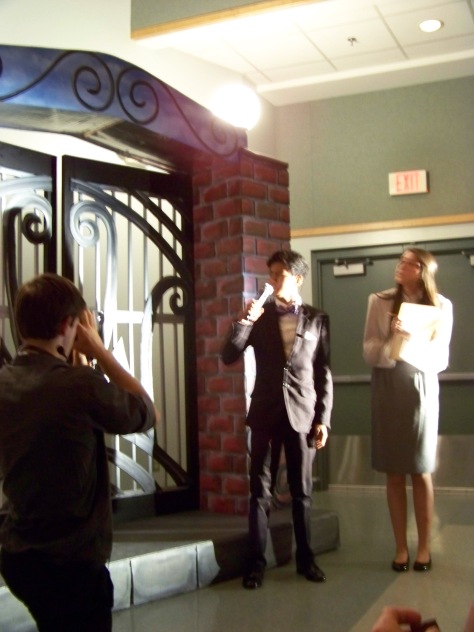 Trout at the gates right before Wonka arrived to let in the ticket holders.
C said he was not going to somersault in he’d break his neck, we asked him to.

I know this is not the best picture but the special effects of the glowing paint was really neat to see!
And a shout out to my mother in law who had hand cramps for painting all the doors with primer.
She’s the best! 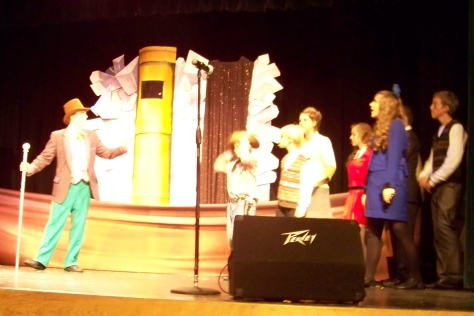 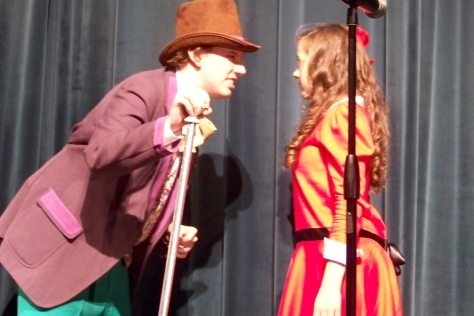 Goodness their facial expressions were super!

The gum makers.  They were one of E’s favorite things to watch.  The gum maker farthest to the left picked up a big ball out of her bucket, lifted it up and down, worker #2 held the green box low so the ball could bd dropped into it.  The green box went up and down a few times finally passing to #3.  Who reached in and pulled out a smaller ball, she gave it to tube girl who dropped it into the tube gave it a good wiggle.  End of tube worker pulled out a smaller ball gave it to red box worker who shook it.  Wonka reached in and pulled out a piece of gum.  Violet was fabulous but moved FAST so I do not actually have any clear pictures of her.

Again not the best picture but you can see Charlie and Grandpa Joe “flying” they did a great job
With the glow in the dark paint on the fan and structure it looked super in the dark!

Check out our giant tv.

Notice Mike Tv is missing and our screen turned to static instead of the test stripes.

Wonka and a shrunken Mike tv.
“Good news is little boys are surprisingly stretchy and springy.”

Veruka Salt, before she was judged a Bad Nut.

Here is the JR class cast members.
They are a great group of kids who are quite talented.  I’m especially fond of Wonka!

What about you?  Did you participate in any plays or musicals while in high school?
Go hug your kids and share a school drama story with someone you love!
jen

4 thoughts on “Willy Wonka and the Chocolate Factory! How I spent my weekend!”